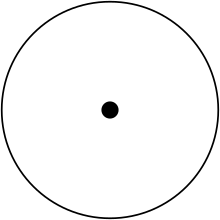 The illustration above shows the monad in the center (the first born being, the absolute) and how it projects / multiplies itself through sacred geometry. From each point / concentration creates another 12 points (per example) and so on infinitely, creating fractals that are part of a whole.
Monad
(click on the image to see video)

The circled dot was used by the Pythagoreans and later Greeks to represent the first metaphysical being, the Monad or the absolute.

Monad (from Greek μονάς monas, «singularity» in turn from μόνος monos, «alone»)[1] refers, in cosmogony, to the Supreme Being, divinity or the totality of all things. The concept was reportedly conceived by the Pythagoreans and may refer variously to a single source acting alone, or to an indivisible origin, or to both. The concept was later adopted by other philosophers, such as Leibniz, who referred to the monad as an elementary particle. (Wikipedia)